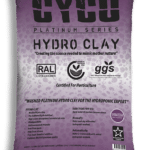 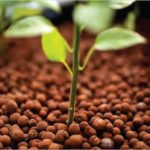 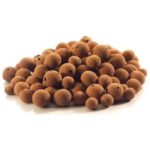 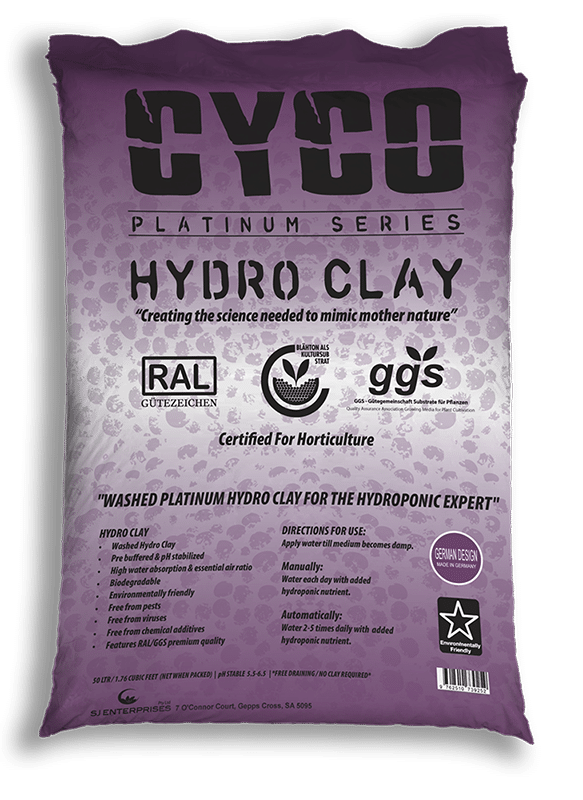 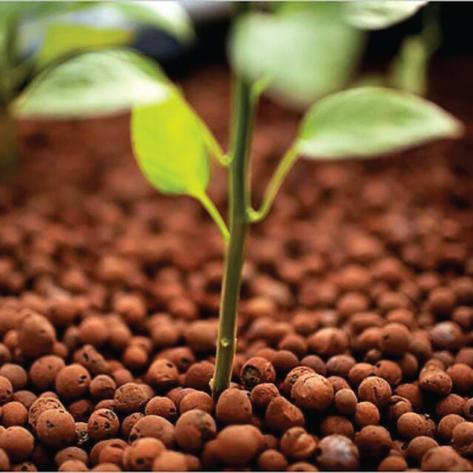 Hydro Clay can be used as a bottom drainage layer or full pot medium for potted plants, to provide adequate run off and maintain ideal rhizopheric root conditions and also increasing the physical stability of plants.

Only 21 item(s) left in stock.
... people are viewing this right now
Description

Hydro Clay can be used as a bottom drainage layer or full pot medium for potted plants, to provide adequate run off and maintain ideal rhizopheric root conditions and also increasing the physical stability of plants.

Cyco Hydro Clay is certified as a growing media through the RAL “Quality Assurance Association” therefore it is a substrate approved and used for Plant Cultivation.

Cyco Hydro Clay is tested monthly by RAL and GGS to ensure the highest quality clay is produced. Can be used as a top dressing for plants to reduce evaporative losses, reduce algae, fungus gnats and unwanted weeds. 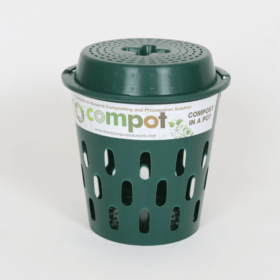 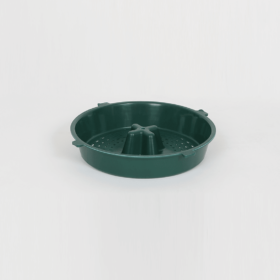 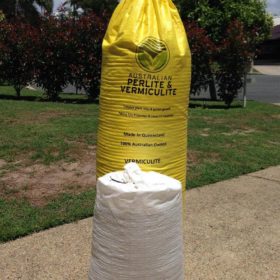 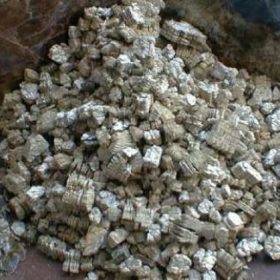 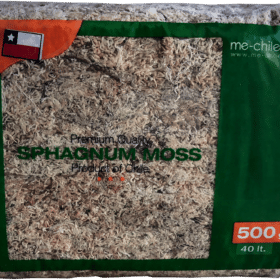 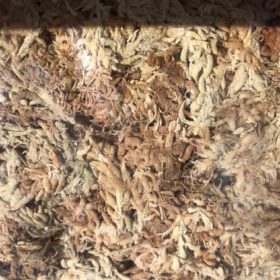 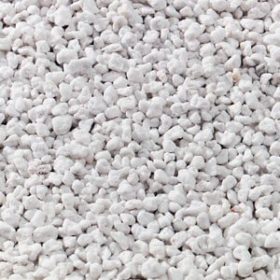 When you open up a bag of commercial potting mix, you expect to see little white specks in it without really questioning why they’re there. But what is perlite, really? What is perlite made of? What does it do for the soil, and is there a reason to add more?

Perlite is a form of amorphous volcanic glass, although it’s often confused by new gardeners as being some lightweight material like styrofoam. It’s occasionally called expanded pyrite and has the nickname “volcanic popcorn”, and I’ll get into why in the next segment. If you looked at a piece of horticultural perlite under a microscope, you would see that it’s quite porous. The cavities in perlite help store nutrients and some moisture that the plant might need, but drain excess water away. It is non-toxic, clean, disease-free, and extremely lightweight and easy to work with..

Perlite is often used in industrial settings as well as in the garden. It’s commonly mixed into such products as lightweight plasters, ceiling tiles, or masonry for stability or as an insulator. It’s also popular as a filtration agent, often used for filtering spent grain or other solids out of beer or in the biochemical industry.

There’s many other uses, but to gardeners, it’s an essential ingredient in their garden.

Perlite begins as a naturally-forming volcanic glass, a special variety which is created when obsidian makes contact with water. This type of volcanic glass has a much higher H2O content than other varieties. Like most other materials from volcanic origin, it’s in the grey to black range with some color variation, and is very dense and heavy. So why does the stuff we use in gardening appear to be white and lightweight?

Expanded perlite is formed when normal pyrite is heated. Heating perlite to a range of 1,560-1,650 °F (850-900 °C) causes the mineral to soften. As it does, the water that’s trapped in the volcanic glass vaporizes and tries to escape. This causes the glass to expand to 7-16 times its original volume, and remaining trapped air changes the color from dark to a brilliant white due to the reflectivity of the remaining water inside the glass.

This newly-created material is much lighter in weight than its previous form and has numerous crevices and cavities. It can easily be crushed with moderate pressure, but does not crumble under the light pressure exerted on it by other soils, and it doesn’t decay or shrink. It is clean and sterile.

The typical chemical composition of perlite varies slightly, as most volcanic glass does. However, perlite which is optimal for the expanding process typically consists of 70-75% silicon dioxide. Other chemicals include:

All of these are natural minerals, and are often part of other soil blends. It has a pH of 6.6 to 7.5.

As mentioned earlier, perlite offers a lot of benefits to your garden.

The most important one is drainage. Perlite is a natural filtration system, allowing excess water to easily drain away while retaining a little moisture and catching nutrients that plants need to grow. This is especially true in raised beds and container gardens, but also in the ground as well.

Airflow in the soil is greatly improved in a bed amended with perlite, and that’s necessary both for your plant’s roots to breathe and for any worms, beneficial nematodes, and other good natural garden inhabitants. Because it’s a mineral glass and thus harder than the soil around it, it also helps to slow down compaction, and keeps your soil fluffy and lightweight.

What Type of Perlite to Use

People often ask whether you should use coarse perlite as opposed to medium or fine-grade. Coarse perlite has the highest air porosity, so it offers the most drainage capability and ensures the roots of your plants can breathe well. It’s popular among people who grow orchids and succulents, and also people who do a lot of container gardening, as it provides excellent drainage, but the coarser bits don’t work their way to the surface of the soil blend as much as fine perlite does. Larger perlite is also less prone to being caught by a breeze and blown away!

The finer stuff is useful as well, but it’s used for starting seeds or rooting cuttings as the drainage provided encourages rapid root production. Fine perlite can also be lightly scattered across your lawn’s surface, where over time it’ll work down into the soil and improve drainage.

If you’re making your own potting soil, perlite is one of the most used components in the industry for the above reasons. It’s cheap, lightweight, and easy to blend into peat or other water-retaining ingredients! But there’s other additives like diatomaceous earth and vermiculite. Why shouldn’t you use those instead?

Again, it comes back to drainage. Diatomaceous earth, or DE as it’s also referred to, is more moisture-retentive than perlite is. It’s usually available as a powder rather than a granule, so it doesn’t reduce soil compaction in the same way, and it tends to clump when wet, which doesn’t allow as good airflow. There are many other uses for diatomaceous earth in the garden including pest control, and you can use it in conjunction with your perlite, but not to replace it.

When comparing perlite vs. vermiculite, vermiculite is very moisture retentive. It’ll absorb water and nutrients and keep them in the soil, which makes it perfect for seed starting blends or for plants that prefer lots of water. In conjunction with perlite, the vermiculite will absorb water and nutrients to feed your plants, while the perlite will help drain the excess water away. So both have their own place in your garden, even in the same container or bed, but they’re not interchangeable. 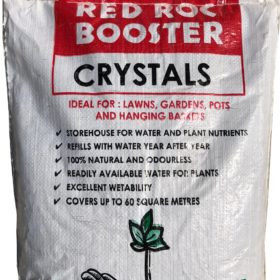 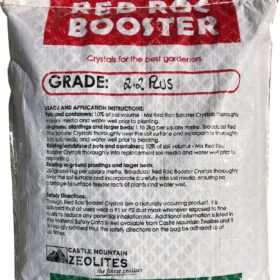